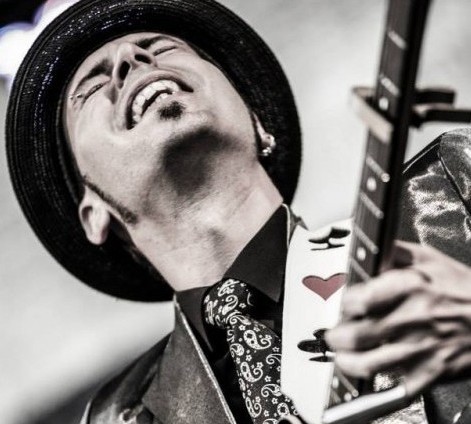 Chino, is one of the protagonists of the scene of Blues and Swing of Barcelona. An unparalleled guitarist, whose slide guitar style, spanning both blues, swing and jazz manouche, is unmistakable. Alongside his band, The Big Bet, formed by Rod Deville on bass and Giggs Nother on drums, has already left a mark in theaters and festivals throughout Spain and Europe.

With his direct explosive and his charisma on stage he is able to dazzle the most demanding public.

The group was born in 2010 with the intention of paying homage to Robert Johnson on the centenary of his birth. In February of that same year they publish “100 Years“.

After the great reception of both the audience and the critics launch in July 2012: “Six“, the first installment of a series of 3 albums composed of 6 original songs each. With this new work are selected as representatives of Spain getting the 2nd prize in the “European Blues Challenge 2013”, a contest attended by bands from 20 countries, musicians and programmers from all over Europe.

In February of 2013 they publish the second installment of “Six“, this time with a furious section of winds formed by Artem Zhuliev, Pol Prats and Big Dani Pérez… 6 new original subjects that surprise again.

The third and final part of the trilogy “Six” was recorded in July 2013. An acoustic session confirming the band’s versatility.

Since its formation, Chino & The Big Bet has performed concerts at festivals in Spain, Portugal, France, Italy, Switzerland, Austria and Luxembourg.

‘’With its meticulous form of playing and with its sometimes festive arrangements, sometimes more nostalgic, magnificent in both production and artwork, “100 YEARS” transports us to the legendary crossing of routes 49 and 61 to the center of Barcelona, Where the album has been recorded with great talent…” “There are artists who understood the genius of Robert Johnson, proving that it is still possible to evolve the blues without deforming it… Chinese & The Big Bet are the example, that Can not be denied!” (Fred Delforge, Zicazine)

“Accompanied by a Dobro electric, Chino knew how to create a personal style, enriching a blues base with latin influences, manouche and hawaiian. At the repertoire level, Robert Johnson’s versions (Dust my broom, They’re red hot) are perfectly blended with classic R&B such as Pink Champagne or Caldonia (one of the most original versions that have been heard for years) or more themes (Hush …). The swing and the melody are part of Chino’s constant concerns as well as the other members of the group who finished the concert with a theme played with unplugged instruments, just a few inches from the audience.” (Jacques Périn, Soul Bag)

“There are artists who understood the genius of Robert Johnson, proving that it is still possible to evolve the blues without deforming it… Chino & The Big Bet are the example, that can not be denied!” (Fred Delforge, Zicazine)

“As a symbol of the export consolidation of blues and swing born in the streets of Barcelona, Chino & The Big Bet has been selected to represent Spain in the European Blues Challenge to be held in March in Toulouse, France” (Eric Lluent, La Vanguardia)
“Chino does not just copy, it gives us his blues point of view in a personal way, in short, an excellent work that deserves to be listened with full attention… Fantastic” (Vicente Zumel, La hore del Blues)
“Chino has a way of interpreting, of living the blues, based on his past experiences: playing in the street, being an adept to jazz manouche, originally from Argentina, globetrotter. Chino knows how to mix to make blues with own musicality, with an unmistakable sound. A dynamic, rich and balanced blues… He is an out-of-the-ordinary guitarist and a remarkable singer who knows how to transmit his fury and passion through his voice with a particular timbre, difficult to qualify, another particularity of the prodigy.” (Ton Ton Erick – Blues & Co)